sipXecs version 4.0.2 was officially released yesterday. There were a bunch of bug fixes (23) and some minor improvements (5) and one feature added.

Of note is the new Skype for SIP ITSP Template. The sipXecs development team has tested Skype for SIP but Skype has not made this generally available. When Skype finally gets this rolling it will be an easy add to our systems. I'll try to post it in the blog as soon as I get my account. I'm signed up for the Beta program and just waiting on Skype.

I tested the 4.0.2 upgrade on one of my sandbox systems and all went well. I'll test it on another any only post if I run into problems.

There is one change in the 4.0.2 upgrade procedure that everybody should note (documented on the upgrade page (http://sipx-wiki.calivia.com/index.php/SipXecs_4.0.2_Upgrade):

The local domain bind zone is overwritten; if: You are using the system as a DNS server, and You have made any manual changes to the zone file then before doing the upgrade, you should add the following lines to the beginning of the file /etc/named.conf:

this will protect your changes from any automated updates by sipXconfig.

Backup your /etc/named.conf file as well as any DNS zone files you may have tweaked (if you installed from ISO they are in /var/named/xxxxx.zone).
Posted by Michael Picher at 2:37 AM 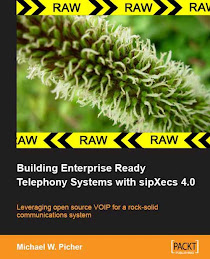